Definition of ‘Beacon Chain’ - The Beacon Chain is a new blockchain that is running in parallel with the Ethereum blockchain in preparation for Ethereum’s transition from Proof of Work to Proof of Stake.

What is the Beacon Chain?

Ethereum is currently in the process of its largest upgrade since its launch in July 2015.

Ethereum’s developers have long planned the upgrade to introduce new features that will scale the blockchain to meet demand while becoming more secure and increasingly decentralized than is possible with a PoW mechanism.

The upgrade was initially referred to as the transition from Ethereum 1.0 to Ethereum 2.0, but the developers have begun referring to “The Merge” between the Ethereum mainnet and the Beacon Chain as bringing together the consensus layer and the execution layer.

The new PoS protocol is a combination of the Casper “friendly finality gadget” (FFG) finality tool and a modified version of Greedy Heaviest Observed SubTree (GHOST), a fork-choice rule. LMD GHOST adds new blocks to the chain, while Casper FFG is responsible for determining the finality on which blocks are part of the chain. PoS is seen as less energy intensive and more efficient than PoW.

When the developers are ready to implement the upgrade, the Beacon Chain will merge with the Ethereum mainnet. The Beacon Chain will coordinate the PoS system as the consensus layer while the existing Ethereum chain will become the execution layer that continues to run smart contracts.

The Beacon Chain will create and validate new blocks on the merged blockchain and reward validator nodes for securing the network. Validators in a PoS mechanism are equivalent to miners in a PoW mechanism.

The Beacon Chain will facilitate the shift in consensus mechanism by introducing staking to Ethereum. The Ethereum blockchain currently runs on a PoW mechanism that uses miners’ computational power to solve complex cryptographic calculations to create and validate blocks. Under PoS, the Beacon Chain will coordinate a network of stakers that will lock their ETH coins to the blockchain to be able to create blocks and process transactions as validator nodes. Stakers will need to deposit 32 ETH to activate each full validator node. The validator nodes will send their ETH stakes to the smart contract on the execution layer, which is the existing Ethereum blockchain. Stakers will receive rewards as a percentage of the ETH they send to the blockchain.

Once the Beacon Chain merges with the Ethereum mainnet, the next stage will be the introduction of 64 shard chains to increase the network’s capacity and transaction speeds. Sharding is becoming an increasingly popular approach to breaking up the vast amounts of data processed on a blockchain into smaller sections to reduce network congestion and increase processing speeds.

The Beacon Chain will assign stakers at random to validate shard chains, to increase network security by making it difficult for stakers to plot to take control of a shard. 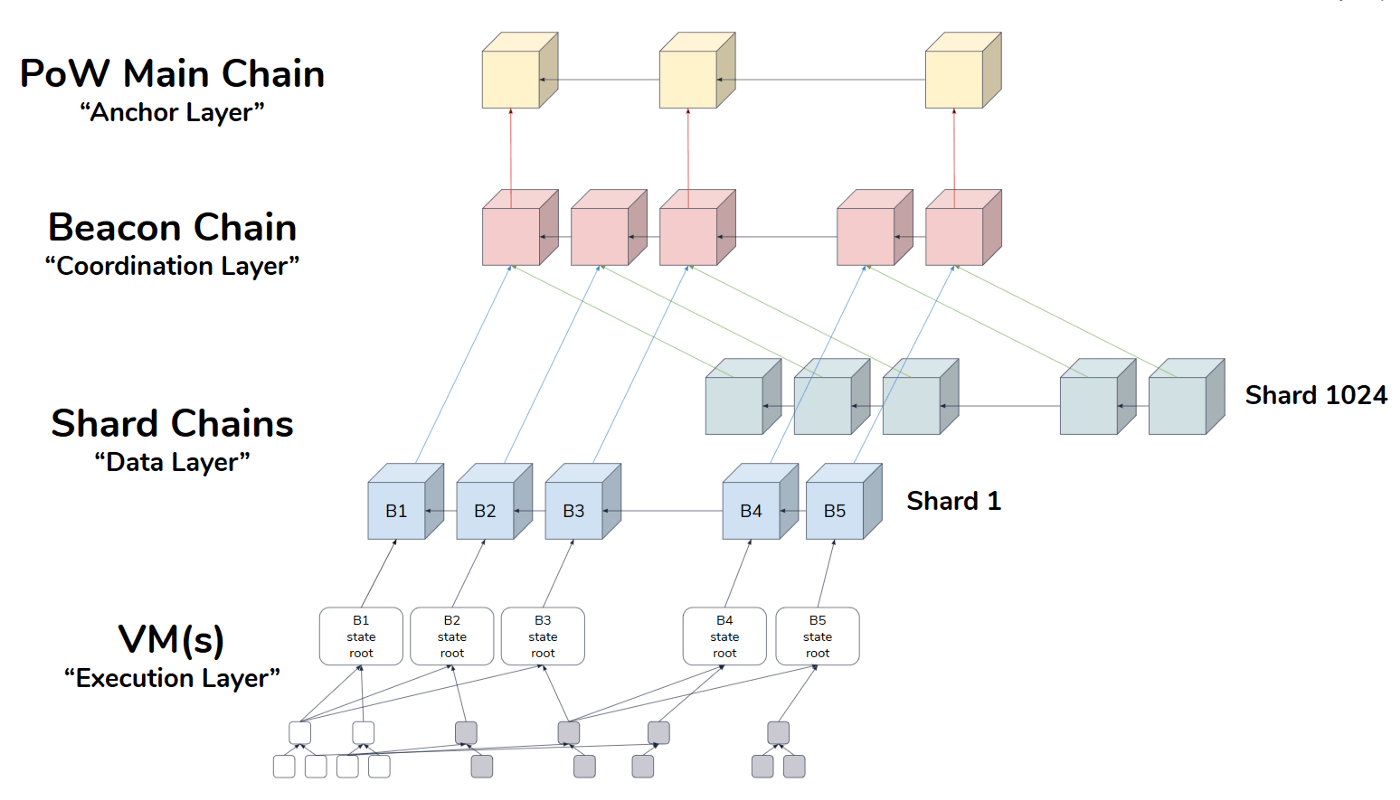 The Beacon Chain will also monitor the validator nodes and give them rewards as incentives or penalties for malicious activity. Penalties include deducting some of a validator’s staked ETH or removing them from the system. A validator will be removed automatically if its deposit drops below 16 ETH.

The Beacon Chain will also designate a random validator to be a block proposer for each shard, organize groups of validators into committees to vote on proposed blocks, and register the state of shards to enable cross-shard transactions. To ensure the security of the Ethereum network, each Beacon Chain slot and each shard will have a committee of at least 128 validators. This means that the probability of a malicious attacker controlling two thirds of a committee would be less than a one in a trillion.

The name Beacon Chain refers to the concept of trusted randomness from a beacon emitting random numbers at regular intervals for a system to use.

The current Ethereum blockchain will run as usual until it merges with the Beacon Chain. At that point it will implement new features to become the first shard chain. The merged network will distribute the load across 64 shards, managed by the Beacon Chain.

The Beacon Chain has been in development and testing since its launch and the merger of the two blockchains is now expected to occur in 2022, although that could change depending on the timescale for developer proposals during the ongoing testing period.

The role of the Beacon Chain will evolve over time, but the aim will remain to be part of a secure and scalable Ethereum network.

Despite the scale of the upgrade, the Ether token will not change in any way. Some cryptocurrency exchanges have announced that they will offer Ethereum staking so that token holders can earn rewards for locking up their ETH tokens to become validators.

Who runs the Beacon Chain?