Definition of ‘Trade Offer Meme’ - The trade offer meme has been copied and shared countless times. In it, social media users offer up exchanges

What is trade offer meme? 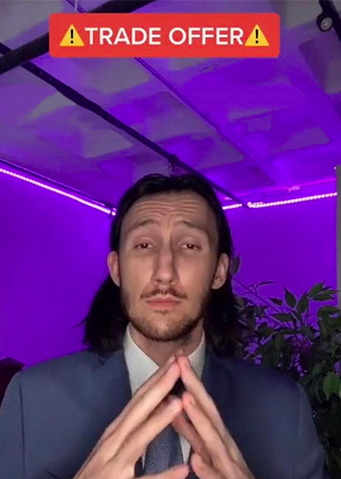 Trade Offer Meme Definition - The trade offer is a meme format involving various barter trades. The meme can be found in the form of both video and still images with the most popular source material coming from TikTok user bradeazy.

The video version of this meme was designed to parody generic trade requests in videos. It splits the screen into two halves that represent each side of the trade and uses the 2020 NBA Draft jingle.

Early iterations of the meme were titled “trade offer to God” and users would offer various items or people they dislike in exchange for deceased celebrities. As the meme grew, the trade offers started including random items and became increasingly unequal. Some say this was a reflection of capitalism, while others simply used the format to be silly.

The history of trade offer meme

Despite reaching popularity in 2021, the trade offer meme has been around a while longer than that.

The first iteration was posted by TikTok user @natebellamy4 on November 12th, 2020. The video used the synonymous 2020 NBA Draft jingle and was captioned "Trade proposal to God". The video offered a trade with God on behalf of humanity, asking to trade several living people for several dead. As of Jan 2022, the TikTok has 86.9k likes.

The initial video did not spark a trend, though, possibly due to its political nature. It wasn’t until a few months later the format would explode.

On March 8th, 2021, another TikTok user — @tylertctv — posted a new iteration of the video meme. Following the same format as the original, he listed various groups of people, COVID-19 and his first and second-round picks (mimicking a sporting draft trade). He proposed to trade his list with god in return for various late celebrities including Black Panther actor Chadwick Boseman, sports idol Kobe Bryant, and his daughter Gigi Bryant.

In the days that followed @tylertctv’s post, the format gained a significant presence on TikTok with many high-profile users posting their own versions.

While the format grew, it still required users to create their own image or video to go with it. This changed when TikTok and Instagram user, @bradeazy, created what would become the meme’s go-to template.

In his version, bradeazy is dressed in a business suit with his hair tidy, as you would expect from a businessman on Wall Street. Rather than going for the usual alive/deceased trade-off, he chose to go a more humorous route. The caption read “I receive: sloppy toppy, you receive: nothing” (those unfamiliar with the term should Google it with safe search turned all the way up).

Originally posted on TikTok, the video was removed and reposted by bradeazy on Instagram where it currently has almost 50,000 likes. The video was also reposted on iFunny where it enjoyed a similar level of success and broke the meme out into the mainstream internet.